Newsroom by the Bay in the media spotlight — two great stories

Posted by multimediabythebay on July 25, 2013 in Uncategorized |No Comments 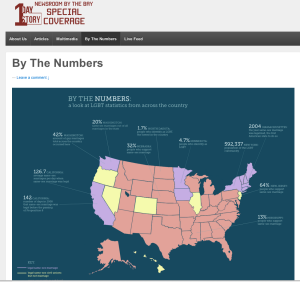 If you’re interested in understanding the NBTB experience, we couldn’t direct you to many better places than two stories that appeared recently online.

The first, published July 22 on HuffPost Teen, part of The Huffington Post, comes from one of our Y2 students, Casey Miller of Campolindo High School in Moraga, Calif.. Miller served as photo editor for the One Day, One Story project, and who was one of our Sharkie award winners.

In “The Stanford Camp Experience,” Miller writes, “This week-long journalism program was a life-changing experience.” She also described her work on the “One Day, One Story” website that students launched during camp to mark the Supreme Court’s rulings in the Defense of Marriage Act and California Proposition 8 cases, which opened a door to marriage equality.

Miller remembers a student who played Macklemore’s “Same Love” in the newsroom while students were working. “(I)n that moment, we were connected by something bigger than us, something going on right now that was huge,” Miller said. “I’ll never forget it.”

“It’s nice when people come out and they have a ball in their hands instead of an iPad,” Waller said. “It’s really refreshing, and I think it improves efficiency of the technology user … when the cell phone goes away and the mind is able to completely regroup and recollect.”

Cutting-edge technology is a means to an end at NBTB, not the other way around. The story quotes co-Director Paul Kandell as saying: “It wouldn’t be right to say it’s a tech camp. It’s a camp for humans who want to be empowered, and we know that digital journalism has the tools to empower.

“Campers are going to come here and deeply engage in using a variety of hardware and software tools, but they are doing it in an environment focused on responsible use and very high purpose,” Kandell says in the article. “You can use social media to the lowest common denominator. But that’s not what we’re about. We are about just the opposite.”