NBTB 2012 ends with laughter, tears and plans for next year

Posted by multimediabythebay on July 7, 2012 in Uncategorized |No Comments

It hardly seems possible that 56 students and 15 teachers and team leaders from 16 states and one foreign country could become lasting friends in just one week — but it happened. And as we left the beautiful Stanford campus on July 1 at the end of our eight-day multimedia journalism program, we realized that the newsroom we’ve created won’t disappear just because we’re going home. 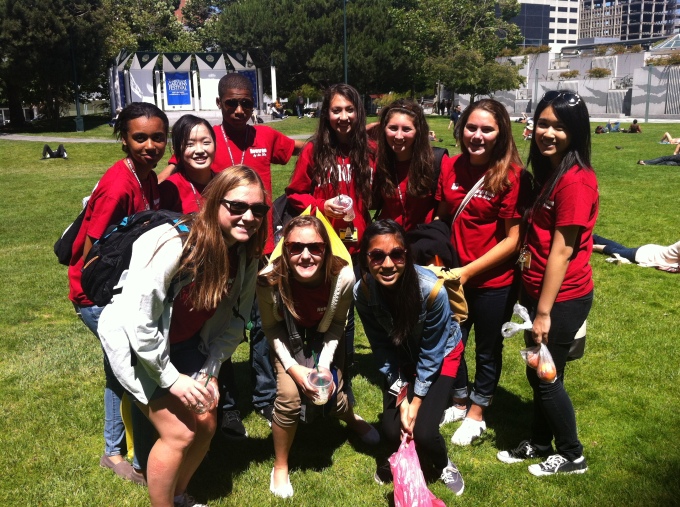 Team leader Brooke Stobbe and the Flame news team dive into field reporting at Yerba Buena Gardens in San Francisco, one of several destinations they visited during their field trip to the city on Wednesday, June 27.

Our closing multimedia showcase on Saturday, June 30, featured the work of six news teams: The Current, The Eye, The Flame, The Globe, The Inquirer and The Zephyr, using websites provided by our official sponsor, School Newspapers Online.

Working over a six-day period, students produced an astonishing array of stories, photos and videos on everything from opposing affirmative action, promoting educational equity, and mixed feelings over the use of the “n” word, to interviewing a Marin County man who had a front-row seat on the Supreme Court’s Obamacare decision on July 28, handling Hitler’s X-rays, and getting an inside peek at the Stanford Linear Accelerator Center (SLAC).

Student Catherine Gong of the Inquirer news team gets a first-hand look at an above-ground replica of Stanford’s linear accelerator. Students met with SLAC communications staff to discuss journalism in a university context.

Teams also built on their field trips to San Francisco and Silicon Valley, including features on the Bay Bridge retrofit and the California Academy’s “Shake House” earthquake exhibit, along with special events such as a crash course in jazz at the Stanford Jazz Festival and a San Francisco Giants game, at which 15 students were permitted access to the field, the press box and the dugout — a rare reporting opportunity.

Marisa Anz, a budding broadcaster and member of the Zephyr news team, kisses a baseball she received from a Giants player during the San Francisco Giants vs. Cincinnati Reds game on Friday, June 29. Anz and fellow Zephyrite Clare Mathias, who did not attend the game, partnered to produce an innovative video story that included a cutaway to Marisa at the ballpark and an interview at Stanford with Malik Grandberry, one of three NBTB students who attended the pre-game chalk talk with SF Giants Manager Bruce Bochy.

As the showcase ended, Deron Essex of University Prep in Chicago asked for time to “say something inspirational.” He began with a tribute to Brooke Stobbe, his team leader and “my mom here,” who pushed him to do his best as a member of the Flame news website.

Deron Essex uses his iPad to work on a story during a trip to the Asian Art Museum in San Francisco during a field trip to the city on June 27. In addition to organizing nighttime hoops on Ujamaa’s basketball court, Deron also visited the Hoover Institution archives and attended a Stanford Jazz Festival concert.

Deron continued with a shoutout to his Newsroom by the Bay family. People are “leaves, branches and roots,” he said. Leaves “are seasonal and flow with the wind,” while branches move “as soon as the wind does.” But roots are “the people in your life that you want to keep close to your heartstrings.”

Deron ended by calling on everyone in the room to hug the person next to him or her. And that’s when a tidal wave of emotion hit — laughter, tears, hugs and promises to keep in touch this summer and beyond. 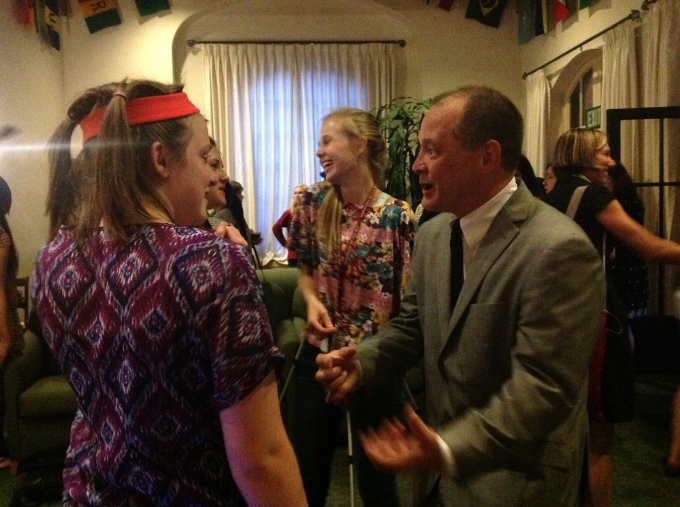 We couldn’t have asked for a better way to close out our Summer 2012 session. The name of our home base for this summer, Ujamaa, means “extended family,” and that’s precisely how we feel as we say goodbye. Our heartfelt thanks to Deron and to all of our wonderful, inspirational, dedicated and hardworking students — we are so proud of your work this summer, and we look forward to the amazing things that you will do next school year!

NBTB 2012 students, staff and program directors Paul Kandell and Beatrice Motamedi gather for a group photo on Saturday, June 30. In addition to producing dozens of stories, photos and videos, students created strong friendships, including plans for an NBTB reunion in Chicago this fall.