Posted by multimediabythebay on June 30, 2011 in Uncategorized |No Comments

Teen pop sensation Manika and her band rocked a crowd of more than 60 students, staff and guests at a concert Wednesday at Newsroom by the Bay. 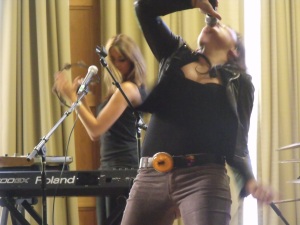 Fresh from an article in Cosmo Girl magazine, teen pop star Manika performs her high-energy set Wednesday afternoon for a crowd of 60 students, staff and guests at Newsroom by the Bay. Photo by Tyree Roulhac.

Students ask questions, shoot video and learn how Manika is using social media tools to reach out to her audience around the world. Photo by Tyree Roulhac.

The hourlong set, including Manika’s irresistible “Just Can’t Let You Go”— a beatbox-influenced single featuring Lil Twist that one reviewer called “a fantastic summer song” — was followed by a question-and-answer session, in which Manika described how she’s using social media — including Twitter and Facebook — to jumpstart her career as a singer and author of a children’s book, “The Exciting Adventures of Boo: Ten Tender Lessons.”

NBTB students not only busted some dance moves during Manika’s performance — they hopped on it as breaking news, producing a stream of stories, videos and slideshows within one hour of Manika’s appearance. Led by senior staff editor Scott Landis, the Sentinel news team tweeted, Facebooked, wrote stories and produced photo and video, treating Manika’s visit as as key event for its arts-themed website, which will debut Friday.

A student tweet on the Courier’s website said it all: “On behalf of #NBTB11, thanks Manika for coming to Stanford!”

Click on the links below for some examples of student-produced work, including a video by Kevin Tsukii:

“Manika Rocks Out at Roble Hall,” story and slideshow, by Lauren Mascarenhas

“Manika Rocks Newsroom by the Bay,” story by Sammy Solomon and video by Brooke Stobbe