Posted by multimediabythebay on May 17, 2019 in News |No Comments

If it’s hard to get a handle on journalist and documentary filmmaker Amanda Darrach’s beat, maybe it’s because she wants it that way. 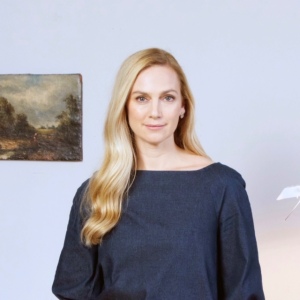 From the intersection of gender, politics and media, to the science that binds baby and grandfather at the end of life, to a surprising look at students at an international high school in New York as President Trump’s travel ban on Muslims was announced (spoiler alert: they thought it might “make sense”), Darrach is a writer whose work reflects a constant curiosity and a wide range of interests.

“The press likes simple stories,” Darrach explained. “Headlines often veer away from complication, to the detriment of public perception and even policy.

“I hope I make time to report into the gray areas,” she said. “As the saying goes, without context it isn’t journalism.”

Darrach’s stories include an investigation into what happens when white nationalists buy the local paper, the debate on whether or not to cover right-wing extremism, data projects on news deserts, the impact of #MeToo and the international reach of President Trump’s anti-press rhetoric.

A 2019 Delacorte Fellow at the Columbia Journalism Review, Darrach spent the past year serving as co-producer of The Kicker, CJR’s podcast series, producing stories on NPR’s accent bias, racial politics in Charlottesville, Virginia, and the Camp Fire in California. A recent podcast focused on “getting to the truth” of presidential politics.

This summer Darrach will begin a fellowship at the Handa Center for the Study of Terrorism and Political Violence at St. Andrew’s University in Scotland.

Earlier this year, Darrach covered a team of students who participated as editors and writers in The Trace’s “Since Parkland” project, which was piloted at Newsroom by the Bay last summer, embedding with them during the final push at Trace headquarters in New York as the project approached its Feb. 12 deadline.

“I was so impressed by the level of mentorship NBTB students received, and by their mature approach to reporting and ethics,” Darrach said. “I’m really looking forward to working with these talented young journalists.”

Darrach will visit NBTB to teach a class on the art of the interview, and to give a presentation on the ethical choices journalists face when covering controversial stories. Her presentation will take place at 7 p.m. on Thursday, July 4. Families and friends of the NBTB program are welcome to attend. Details including location will be released later this month.