Posted by multimediabythebay on May 9, 2019 in News |No Comments

Gun violence. Climate change. Immigration. Crime. Homelessness. No matter what their point of view, those who create journalism and those who consume it often agree on one thing: The social problems behind today’s headlines often feel as if they’re too complex to grasp, let alone resolve. 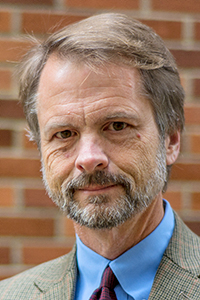 Photo by University of Oregon photo/Fair Use educational exemption.

But Brent Walth, an assistant professor of journalism at the University of Oregon, who was part of the team that won the Pulitzer Prize for public service in 2001, is taking things in a new direction.

Walth, along with U of O colleagues Nicole Dahmen and Kathryn Thier, have launched the “Catalyst Journalism Project,” which blends watchdog and investigative journalism with a newer approach called solutions journalism.

“Journalists often must write stories that readers may not want to hear, and this is where watchdog reporting and solutions journalism can combine to make a difference,” said Walth.

“The problem is that these two genres don’t overlap with each other very often — they stop at the water’s edge,” Walth added. Solutions journalists also must take an extra step, finding specific people and programs that point a way forward.

“You can address any topic, but within the topic, you have to find the story,” Walth said.

Walth will talk about his career and new approaches to watchdog and solutions journalism as NBTB’s keynote speaker on Monday, July 1.

In the words of the Solutions Journalism Network, a nonprofit organization founded in 2013, solutions journalism is “rigorous, evidence-based reporting on responses to social problems.”

How is it different? Unlike most mainstream news stories, a work of solutions journalism typically covers a response to a problem and how it works; looks for evidence that the solution has had quantifiable impact, not just good intentions; seeks insights that could help others attack the same problem; and points out limitations of the solution, which could make it impractical or impossible for others to use.

For example, in a recent article in the Eugene Weekly called “Courting the Ones Who Need It,” two University of Oregon students profiled a community court in Eugene, Oregon, that began working with New York’s Center for Court Innovation on a new approach for frequent misdemeanor offenders.

Using crime data, community surveys and a risk assessment model that analyzed a person’s “criminogenic” potential for doing wrong, the court identified neighborhoods where crime is especially concerning and offered offenders social services in exchange for a guilty plea and a requirement to do community service — right back in the community where they committed the crime.

Other recent examples of solutions journalism: A “scrappy” California crime lab that found a way to crack more gun cases — thanks to a “no-nonsense” director who cross-trained her staff and replaced handwritten memos with iPads, steps that shrank gun processing times from more than a year to four days; “Project Homeless,” an ongoing series by the Seattle Times that compares regional responses to what’s happening in other cities, often discovering better approaches elsewhere; and an innovative program in Kenya that is improving male health in rural areas by throwing in check-ups for livestock — the main reason why men won’t take time to visit clinics in the first place.

For Walth, solutions journalism is the latest turn in a career that began in high school. The summer before his senior year of high school, Walth attended Newspapers by the Bay, the longstanding Stanford-based program that became Newsroom by the Bay in 2011. 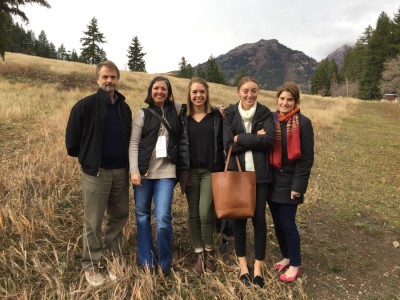 Walth and University of Oregon associate professor Nicole Dahmen (second from left) with students at the Solutions Journalism Summit in Sundance, Utah, in November 2018. Photo by Brittany Norton/Fair Use educational exemption.

An Oregon native, Walth followed the advice of his high school adviser, Bill Flechtner, to attend the U of O’s School of Journalism and Communication, graduating in 1984. He worked as a staff writer for Willamette Week and state Capitol bureau reporter for The Register Guard.

Pulitzer judges praised the series for exposing “harsh treatment of foreign nationals and other widespread abuses,” which led to reforms in Immigration and Naturalization Service policy.

Walth is the author of “Fire at Eden’s Gate: Tom McCall and the Oregon Story,” a biography of Oregon’s environmental governor. He is a five-time winner of the Bruce Baer Award, Oregon’s top reporting prize; recipient of the Gerald Loeb Award, the nation’s highest prize for business and financial reporting; and a finalist for the 2000 Pulitzer for explanatory reporting. In 2008, he founded the Civic and Watchdog Journalism Scholarship, awarded yearly to a student who plans to pursue investigative reporting.

As a Nieman Fellow at Harvard University in 2006, Walth held the Louis Stark Fellowship for the examination of labor and workplace issues. As a fellow, he studied the causes and consequences of the widening income and wealth gaps in the United States, and the ways in which the media cover issues of economic disparity.

In 2011, Walth returned to Willamette Week to become the newspaper’s managing editor for news. He lives in Portland with his wife of 21 years, Shannon, and their 14-year-old son, Griffin.

Walth’s keynote address will take place at 7 p.m. Families and friends of the NBTB program are welcome to attend. Details including location will be released at the end of May.