Posted by nbtbphillicity on July 8, 2017 in News |No Comments 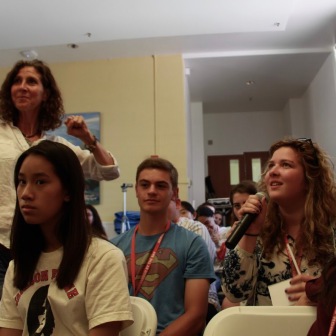 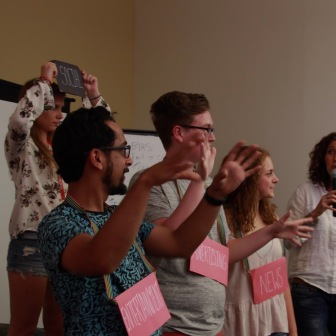 Staff and students flashed hands to show the media at work.

Team leader Jordan Tichenor holds up a frame to make a point about fake ads.

Students had 30 minutes to go over facts, write scripts and do standups. 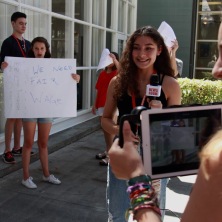 Team Lighthouse stepped up and shot their video by deadline,

Student Alexis Ferguson asked how the media can preserve a sense of “humanity” when reporting.

Simple questions, but they were the beginning of an unusual exercise by Deborah Pardes, an artist and media literacy advocate whose “Arresting Knowledge” show kicked off a nationwide tour at NBTB on July 4.

Pardes, a former folk singer and founder of Artists for Literacy, challenged NBTB students and staff to examine how different kinds of media intersect. Students also examined the line between bias and objectivity by doing news videos based on facts drawn from a real story — the 1968 Memphis Sanitation Workers strike.

The lighthearted tone of Pardes’ performance was a skillful disguise for a powerful message.

By asking simple questions and repeating them, Pardes showed how people identify themselves changes the way they consume their media. She explained how marketers target groups of people by how they express their identities, and when the media determines their target audience, they will cater information to the wants and desires of that group.

During a two-hour workshop that included several exercises, students tried to visually explain the relationship between news, entertainment, advertising and social media.

Audience members told panelists to interact in various ways to show the connections between these forms of media, for example, telling Whalen (social media) to “hover” over the other panelists to convey social media’s dominance of other media, and Tichenor (news) to hold hands with Gramlick (entertainment).

Then Pardes posed the question: If everything is so closely connected, where is the line that separates these categories? Can news be entertainment and vice versa?

According to student Zach Berman, “entertainment is not news” and “news is not meant to entertain.” During the performance, Berman told “social media” to stand in front of the other types of media since most people get their news from sites like Twitter and Facebook nowadays.

After the event, student Sumin Lim felt that what drew the line between the categories “really depends what the intention and (the) audience is behind the use of the platform.”

Tonight’s news, from the past

In a video activity called “Both Sides Now” created by Newsroom by the Bay staff, students received a set of notes drawn from accounts of the 1968 Memphis sanitation workers’ strike. Students broke into teams, then had 30 minutes to write a television news script and film a one-minute news report based on the notes.

Depending on which team they were on, students were asked to adopt a bias, either the point of view of the sanitation workers, two of whose members had been crushed to death in a faulty compactor, or the city officials, struggling to keep up with tons of uncollected garbage. A third group did an objective video balancing both sides.

Afterwards, students voiced their scripts and explained which facts they had used, which they had left out, and how they had crafted their videos to promote a particular bias or to ensure objectivity.

Students were not told that the facts were real until after the news reports had been taped.

Student Quinn White concluded that bias is easy to “sneak in” simply by not using a particular fact or by over-emphasizing others.

“You’re not lying, but you’re not letting (people) form their own opinion,” she said. “You’re pushing them in a direction.”

The Memphis strike was a key moment in American history, including the iconic “I am a Man” posters that defined the civil rights struggle.

Rev. Martin Luther King, Jr., who had traveled to Memphis to help sanitation workers in their fight for better wages and working conditions, was assassinated on April 4 at the Lorraine Motel in Memphis, the evening before the planned protest.

Pardes said she hoped that by engaging citizens in how news is made, they would all become more conscious in conveying information and consuming media.

“You are the ambassadors of integrity,” she told NBTB students.