Worlds Apart: Shining a light on homelessness in San Francisco

Posted by multimediabythebay on July 5, 2016 in News |No Comments

Joseph (left) and Blue (right) were two of the many San Franciscans interviewed by Year 1 students. Credit: Danielle Schwartz

It was a tale of two cities, as only Newsroom by the Bay students could tell it: Worlds Apart, a pop-up website on San Francisco’s homeless crisis, combined on-the-ground reporting, photography and videos by Year 1 students, with intensive support by Year 2 students, including website design, research, editing and publishing.

Worlds Apart was launched on Tuesday, June 28, barely 48 hours after students checked in at Larkin North, home base for the summer 2016 session. It was completed four days later, in time for the closing multimedia showcase on Saturday.

A deeply collaborative effort that was entirely digital, Worlds Apart focused on reporting by 55 Year 1 students during their daylong field trip to San Francisco on Wednesday, June 29 — the same day that more than 70 media organizations had targeted for an intensive look at the city’s housing crisis. Meanwhile, 15 Year 2 students served as editors, providing web design, graphic design, and editing of stories, photos and videos.

For their reporting push, Year 1 students and their team leaders visited homeless shelters, community organizations, parks and street fairs in the Castro, Haight-Ashbury, Mission and Tenderloin neighborhoods, among others, including an extraordinary one-day Care Village that provided haircuts, showers and other much-needed services to the homeless at San Francisco’s Civic Center:

Year 2 students prepared for the push on Tuesday by visiting Palo Alto’s Opportunity Services Center, a community group that advocates for housing solutions. 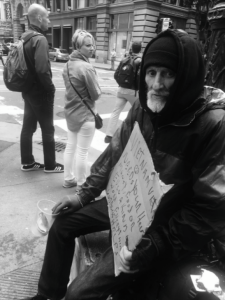 The day after the push, they visited the San Francisco Chronicle, where they met with Kevin Fagan, an award-winning reporter who has spent more than two decades documenting the city’s homeless crisis, along with Audrey Cooper, the Chronicle’s editor-in-chief and the driving force behind the SF Homeless Project.

Newsroom by the Bay has a history of seizing the journalistic moment, including a 2013  pop-up project called “One Day, One Story” that covered the Supreme Court’s landmark decisions on marriage equality and the Defense of Marriage Act.

No matter where they came from — the Bay Area, or other U.S. cities, or even other countries around the world — thanks to Worlds Apart, Newsroom’s students had an extraordinary opportunity this year to witness and testify to a problem that has gone uncovered and overlooked for too long. 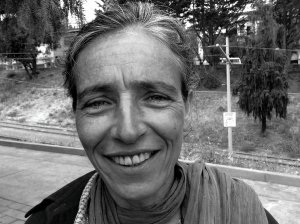 Paula B., a 45-year-old homeless woman living in Mission Dolores Park, believes that happiness is found within the heart and not outside. Credit: Jenny Li

In “Finding Solutions Is A Reporter’s Job,” Year 2 student Lisa Shen wrote that “being a reporter is not easy. You always have to be in the loop, not only understanding the issue at hand but also reporting the story in a compelling way.”

But the reporters — both student and career journalists — who were involved in the SF Homeless Project broke new ground, Shen believes, not only documenting problems but suggesting ways to fix them.

“And that is a new kind of journalism,” Shen wrote. “We are all part of society …. We should all be inspired to be proactive on this issue. As journalists, speaking up for society’s most vulnerable citizens is our job.”