Posted by multimediabythebay on June 28, 2016 in News |No Comments

STANFORD — Less than 24 hours after students arrived and checked into Newsroom by the Bay’s 2016 summer program, they’re already at work reporting, shooting and forming their journalistic goals.

Team Hawkeye has designed a theme for their website based on the popular Facebook page, Humans of New York. Team members are planning to document the diversity in people found in the streets of San Francisco and Palo Alto. 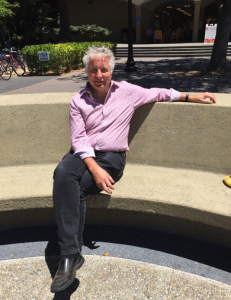 Jon Cousins of Stanford’s KZSU radio station spoke to NBTB students about a recent visit to Stanford by President Obama.”

The Year 1 team will design a digital platform to showcase their stories on their website.  The project will include a wide range of interviewees, from janitors to professors and doctors.

“We are planning to interview working class people..We sat in circles and thought of ideas and (this project) is a team unit,”  Hawkeye team member Victor Liu said. “It’s one topic with many stories and it’s very centralized. It requires a lot of teamwork and I work well both individually and as a team member.”

Humans of New York has also inspired other teams to create brief profiles of people at Stanford. Interviewing both the young and the old, team members of Cardinal, another Year 1 group, have learned more about themselves and the diversity that can be found on the Stanford campus.

Cardinal team member Ananya Panchal developed an appreciation for working in a team while attempting to connect better with a difficult source.

“Today, we worked together and it was more comfortable because I’m not familiar with Stanford, and I couldn’t think of any questions,” Panchal said. “When I was interviewing to get the answers we needed, my friend thought of the question to get the answer we needed.”

The Year 2 strand, in which students work on their own multimedia projects, takes on a much more individualized edge, allowing students to pursue their goals.

Team leader Jordan Tichenor praised Year 2 students for their progress so far, but also for their balance of individualized and group work.

“I’m very optimistic, I’m very happy with what we’ve seen so far and I’m very excited to see where it goes,” Tichenor said. “I think it’s good because even though the Y2s are working individually, you see a lot of collaborative work still.”

Camper Loren Kreisle, taking a less traveled route, will explore what he calls the “bystander effect,” and more specifically the way that people take to their mobile devices when witnessing an event.

“I chose it because I’m very interested in technology, and that kind of stuff, but I also have an interest in psychology and human behavior, so I thought, you know, ‘let’s put them together,” Kreisle said.

In fact, Kreisle plans to dabble in a lifestyle free of smartphones and screens, a first at NBTB, a traditionally digital program.

“I’m just going to start with my phone because that’s probably the most important technology in my life, and just kind of strip that (away) and see what happens,” Kreiesle said, adding that he plans to create a blog to document his day-to-day experiences.