Posted by multimediabythebay on April 22, 2016 in News |No Comments

Every year, we’re blessed to find teachers whose expertise, passion and dedication to the art and craft of journalism inspires us all. This year as usual we are welcoming an award-winning group of instructors. 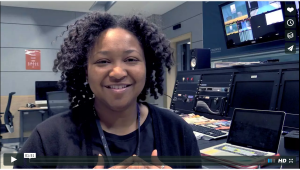 Click above for more on Newsome’s approach to teaching and sharing great video stories.

However, there’s a new addition, who is coming to us from 5,600 miles away: Senedra Newsome, senior technology coordinator and video instructor at Chadwick International School in Songdo, South Korea.

Newsome oversees Chadwick’s state-of-the-art television studio. She graduated from the University of New Orleans with a B.A. in communications and film, and also attended New York Film Academy for music video production. During her senior year, she created a clothing line and established herself as a freelance designer.

Newsome believes her experience with technology and design allows her to create a space where students can escape from “day-to-day stress” and “let their minds be free.” For example, a recent collaboration with visual artist BMike resulted in the creation of 15 4×8 murals and “Our Voice,” a video compiled from 10 hours of footage.

“I feel as though everyone should appreciate good work,” Newsome says, adding, “there’s two things I do when I find something amazing: One, share with others. And two — go create something just as amazing.”