Who says you can’t go home again? Students return for NBTB 2014 at Stanford

Posted by multimediabythebay on April 18, 2014 in Uncategorized |No Comments

It was the American novelist Thomas Wolfe (not to be confused with the American journalist Tom Wolfe) who once wrote that “you can’t go home again.” But students we saw at NBTB last summer are proving that adage wrong by coming back as Year 2 students, counselors-in-training, and even team leaders. 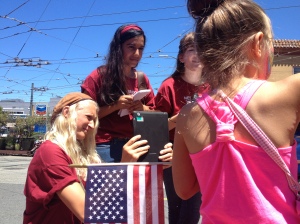 April Martin-Hansen (bottom left), of San Lorenzo Valley High School in Felton, Calif., hopes to push forward with the news website she launched in September. She’s now editor-in-chief (as well as the founder of her school’s surf team).

Last summer, “I got the tools I needed to create an online newspaper for my school, which we had never had before,” Martin-Hansen wrote in her application, adding that she hopes to learn more about using web design to build audience.

“This year I would like to take my learning a step further and explore what else I can do to improve as a journalist,” Martin-Hansen wrote. 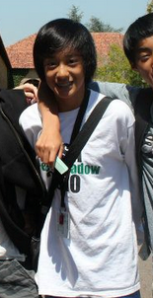 David Wu, who was a Year 1 student last year and hopes to be online editor next fall for The Talon, at Los Altos High School in Los Altos, Calif., wants to work on syncing online and print coverage.

“Since print issues only come out once a month, web content is imperative to have in order to keep the school informed in the time between distribution of print issues,” Wu wrote.  He also hopes to put his leadership skills to work as a mentor to others just starting out online.

“I think NBTB has so much to offer to high school journalists and I want to be a part of that process, ” Wu wrote. “I’m excited to not only get ideas about how to improve my own school newspaper, but also to help other programs around the nation grow and blossom.” 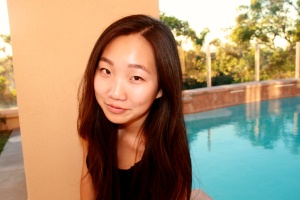 Michelle Min of Sage High School in Newport Coast, Calif., will be returning with plans to “develop a strong online foundation for my high school.”

“Newsroom by the Bay gave me not only the tools to start my own online news site, but also the confidence and experience to lead my staff,” she wrote, of NBTB 2013.

“During those seven summer days, I was surrounded by friends who had the same goals as me. We enjoyed going to class, we were excited about what we were learning and we didn’t want the week to end.” 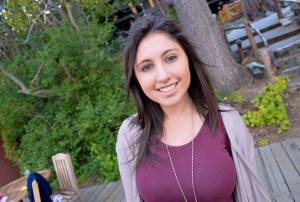 Finally, Madeline Ottilie (at left), from the Francis Parker School in San Diego, spent this year working on her school’s print newspaper, including writing a complex and at times controversial story that delved into life — and assumptions about — a continuation high school near Parker.

“This year, I decided it was time for someone to cross the street and tell their story,” wrote Ottilie, who will be web editor next year.

“I want to tell more stories like this,” she added. “I want to give voice to the people who need their stories to be heard. I have known for some time that I want to study journalism in college, and have been working to become a better reporter and writer.”

Along with these returning students, we’ll be welcoming Simon Greenhill and Casey Miller, Year 2 students last year and now counselors-in-training; Emma Steiner and Patty Jia, who are stepping up as team leaders after serving as CITs last year; and teachers/team leaders Michelle Balmeo, Eric Burse, Scott Landis, and Jordan Tichenor.

We’re happy to greet old friends and to discover new ones. We still have some residential and commuter spaces left, so if you’d like to become part of our NBTB world, please click here to apply.